The Club has been playing at its Rubislaw grounds since the 16 acre facility was jointly purchased in 1914 by the Aberdeen Grammar Former Pupils Club and the then Aberdeen City Corporation.
The facilities have been upgraded over the years with the FP Club constructing the Fine Pavilion and then the Stand in 1993 which marked the centenary of the Club. More recently, new floodlighting and changing rooms were both completed in 2009 with funding from Aberdeen City Council.

The Club has a long history of producing Scottish internationalists, with the late Dr Donny Innes and Dally Allardice being our most capped players during the 1940’s (8 caps) until Robbie Russell was awarded 27 caps from 1999 until he retired in 2007.

More recently Johnny Beattie, Moray Low and Murray McCallum have all been capped by Scotland after playing for Aberdeen Grammar Rugby.

The Club has produced five Presidents of the Scottish Rugby Union, the most recent being the late Charlie Ritchie in season 1997-1998. D.W.C. (Doug) Smith is also remembered as being the manager of the victorious 1971 Lions Tour to New Zealand and Australia.
Visitor information 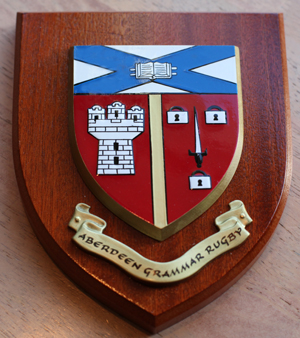 In season 1996-1997, the Club was playing in the old National League Division 2, often in the shadow of their long-time local rivals, Gordonians.

An ambitious 5-year plan saw the Club rise to Premier 1 in season 2000-2001, thereafter finishing in the top half of this league for 5 seasons before being relegated in 2007.

Premier 1 status was regained in 2010-2011 and consolidated during season 2011-2012 when the Club became members of the new streamlined 10 team Premiership.

In 2012-2013 the club finished 5th in the Premiership, missing out on British & Irish Cup involvement by a single point. The Club did, however, win the Caledonia Cup that season.

The Club currently has around 70 registered players across its 2 senior sides. For Season 2021/2022, the First XV is competing in Tennent’s Premiership while the Second XV are playing in Tennent’s Caledonia North Regional League Division 2.

There are also currently around 275 players across the Club’s successful Juniors (U13-U18) and Mini sections (P1–P7) which are open to both boys and girls.
Our History

Want to get involved?

We're always on the lookout for new club members!
Anyone wishing to join the Club or to assist in any way should contact:

Chairman & Director of Rugby
g.thomson.t21@btinternet.com
07718905003
...or follow the link below.
Club Membership
Manage Cookie Consent
We use cookies to optimise our website and our service.
Manage options Manage services Manage vendors Read more about these purposes
Preferences
{title} {title} {title}