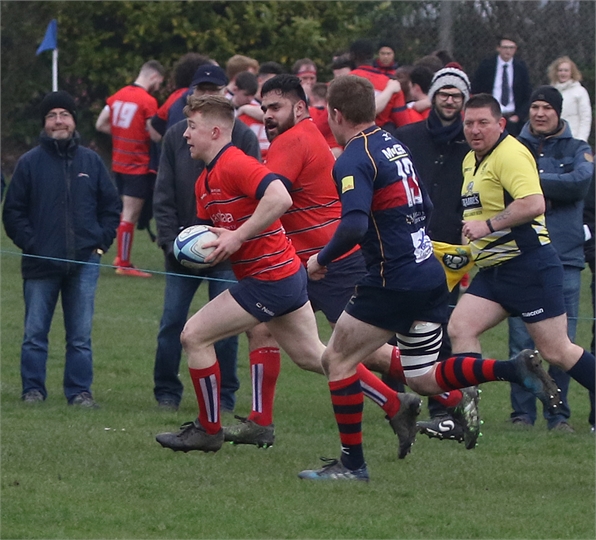 Aberdeen Grammar ended their National League 1 campaign in style with a 50-25 victory against rivals Dundee to guarantee a fourth-place finish and promotion to the newly constructed Premiership.

There were smiles all round at Rubislaw, as players, coaches and supporters reflected on a season which could yet end with the club picking up silverware on April 20 when the club take on northern neighbours Highland in the final of the National League Cup in Stirling.

Grammar head coach Ali O’Connor said: “When we have been good, we have been very good, as best reflected in the 17 try bonus points we have picked up from 22 starts.

“This team has worked hard to get here, doing all that is required of them.

The cup gives them the chance to gain a tangible reward, although today we were able to retain the Dallas Allardice Cup which we play for when we meet Dundee High.

Once again our forwards were the basis for our success, and a credit to forwards coach Iain Stanger.”

Captain and stand-off Sam Knudson looked to the future when he said: “There is so much potential in this squad. “We will do well in the new set-up, especially as I believe we are well capable of beating all the other five who are going up with us.

It was good to finish on a high. We can now look forward to and enjoy the cup final.”

Dundee High proved to be no slouches, coming off the back of three wins which effectively took them out of the bottom three, and looked to be in search of a fourth consecutive win when they took a sixth minute lead when lock Angus Thomson barged over from a ruck for a try which was converted by full back Fraser Mackay.

Stung into action, Grammar hit back with two tries in three minutes attributed to hooker Ben Ingles and flanker Chris Jollands, one of which was converted by full back Bryn Perrott who hit the post with the other.

Dundee High refused to roll over, hitting back with a well-struck penalty from Mackay in 25 minutes to make it 12-10.Grammar then raised the bar with their passion and pace to take the game away from the Mayfield men, scoring two more tries before the break through centre Tom Aplin and lock Robin Cessford, both converted by Perrott.

Mackay did, however, manage to kick another penalty for the visitors, making it 26-13 at half-time.

The second half belonged to the Rubislaw side who added a further four tries to take their tally to eight for the afternoon, scored by prop Calum Reddish, centres Murray Mitchell (2), and Sean Mills, two of which were converted by the excellent Perrott.

High had the consolation of late efforts of their own, falling to front row men Jack Newth and Craig Mackenzie, to which Mackay added a conversion.

But there was no stopping Grammar’s progress, best summed up by lock Ewan Stewart who was playing his last league game before heading south, who said: “This is a good Grammar side who have grown in strength and character over the season. They can build on it next season.”

Photos are in the gallery: