Aberdeen made it 5 wins from 6 and entered the top half of the BT National 1 table after a spirited second-half performance against Dundee HSFP at Rubislaw.

Dundee have previously won the last three encounters, yet Aberdeen’s grit and determination proved too much for the visitors in the second half.

The winning side’s second-half performance showcased more of their wide and fast running style of rugby, with a few forwards drives sprinkled in for good measure, to score 22 unanswered points.

Aberdeen Head Coach, Alasdair O’Connor, said “I’m very pleased. We don’t get to beat Dundee very often. When we played back to our game plan of trying to stretch them and move them around that’s where we had success.”

“In the first half, we probably had to beat them up a bit by playing the game tight and off nine. The message at halftime was to move the ball and pass off ten and that’s where the guys found the space and closed really well.”

“We’ll keep things ticking over with the odd session over our 3-week break and use it as a chance for our players carrying little knocks to recover and take the opportunity to get the boys back in the gym and get strong again.”

The first half was a stop-start physical affair from with both sides losing players to injury early on. Scrums and lineouts dominated early play.

Aberdeen struggled to get the ball out of their own half for the first quarter. Dundee capitalized well and were the first to notch up some points on the board. Ex Aberdeen player Ali Mackie rumbled over the line for the first try and a penalty soon after saw the men in blue ten points clear after 25 minutes.

The final 10 minutes saw the home side wake up and open the game up wide. The ball started to move faster up the pitch and through the hands catching Dundee offside. Bryn Perrott’s subsequent kick allowed Aberdeen to end the half only a converted score adrift.

The second half offered a totally different game. Both sides were running the ball quickly and effectively and within the first four minutes Dundee then Aberdeen both made line breaks and drew offside penalties to add three points to their first-half tallies.

Aberdeen implemented their coaches’ halftime instructions to a T. The ball moved from wing to wing and slowly up the park towards the Dundee try line.

The men from the granite city drew another penalty, this time going for a scrum on the Dundee five-metre line. No. 8 Greig Ryan picked and went, and with a pop pass sent winger Grant Walker over to take the home side to within 2 points.

The men in white, over the next 20 minutes, continued to up the games speed finding holes in the Dundee defence. A further 3 points from Perrott then a try from Nathan Clough took the hosts into an 8 point lead.

Soon after, the Aberdeen forwards drove a Dundee scum back over the whitewash allowing Greig Ryan to easily dot down the ball, on the 70th minute and pull 3 scores clear.

In the final 10 minutes, the game reached fever pitch. Both sides made breaks and key tackles for an end to end battle which saw the final whistle go after a 50-metre run by Dundee was stopped, turned over and ran back 90 meters before the ball was knocked forward by Aberdeen just short of the try line.

Referee Kevin Whyte’s comment on the final whistle summed up the passage of play perfectly, “I should award you both tries for that effort.”

Aberdeen have 4 weeks off for the autumn international break and will resume their campaign on the 2nd of December away to Falkirk. 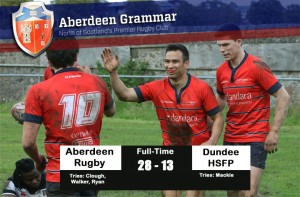