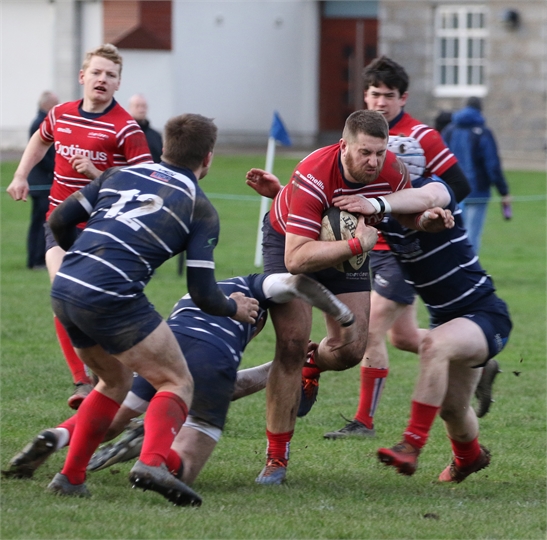 Aberdeen Grammar had lost six of their previous seven Premiership matches but surged back into contention for a play-off spot with a 40-27 win over Musselburgh.

The six-try win should also mean the Rubislaw men don’t need to worry about the prospect of being embroiled in a relegation dogfight this season.

Club chairman Gordon Thomson said: “The win keeps us on track for my start-of-season target of a top-six place. We have four more difficult games to play, including Marr, Currie and Hawick, the three top teams, and a more winnable one at GHA next week.

“The hard work for this game was done in training this week when we had full turnouts.”

Head coach Ali O’Connor was delighted with his charges’ response, agreeing with Thomson’s assessment of the work done in the paddock. He said: “The players rallied for this one, bringing an intensity and a focus to the game, and were generally accurate in all we did. There were some fine performances, not least from lock Jordan Robertson who was just immense, while Greig Ryan’s return to the back row was perfectly timed.

“It was a good all-round showing, especially up front, where we were totally dominant. We now need to keep it going in Glasgow next week before our big run into the end of the season.”

Grammar were on the ascendancy from the off, taking the play to the Edinburgh side who had no answer to the rampaging forward play of the Rubislaw side, led by Robin Cessford, Robertson and prop Matt Schosser, but all orchestrated by the irrepressible Ryan who capped his return to the side with two tries.

It was stand-off and captain Sam Knudson who opened up the Musselburgh defence to set free centre Tom Aplin to race over in 13 minutes, just after Danny Owenson had kicked a penalty for the visitors. Aplin added the extras, as he did for five of the home touchdowns.

From then on it was nearly all Grammar, apart from a long-range penalty from Owenson.

Such was the home supremacy, they were able to add a further three tries before the interval, two converted by Aplin. The scorers were attributed to Ryan (2) and hooker Andrew Cook, whose searing run from a well-chosen angle left the Stoneyhill side’s defence in tatters.

The home domination continued in the second half, bringing tries for the enterprising Knudson, and winger Doug Russell, both converted by Aplin who ended the day with a personal haul of 15 points. To their credit, Musselburgh never gave up, scoring three touchdowns through Owenson, replacement Sandy Watt, and finally former Grammar captain Callum Champion, all three converted by Owenson, bringing his tally to 17.

The downside to Grammar’s day was an injury to flanker Will Alton which resulted in him dislocating his elbow in the 70th minute, but overall it was a day to savour for the Rubislaw faithful who were seeing their team win at home for the first time since beating GHA on October 12.