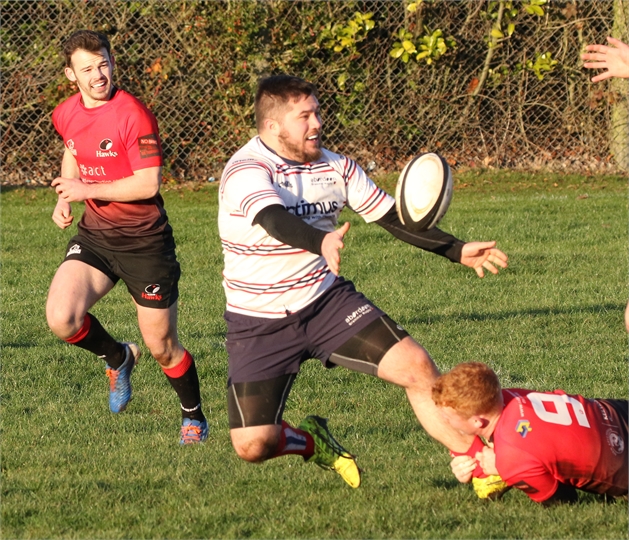 Aberdeen Grammar left it too late against Glasgow Hawks, coming away from a physical game with a losing bonus point.

The Rubislaw match was the only Premiership game of the weekend, with the four other fixtures succumbing to the icy conditions.

Despite being left frustrated by some mistakes at key moments, Grammar head coach Ali O’Connor was able to take several positives from his team’s performance.

He said: “Murray Mitchell was outstanding in the centre and was by a far way our man of the match, especially when he had the ball in hand.

“I was impressed by some individual responses, but ultimately, we didn’t play the big parts of the game well.

“We would be right in it and it would just be one error that cost us. They would come back with another score and the game would be thrown wide open again.

“Our defence was more organised but will still need improvement before the Selkirk game next weekend.”

After a physical start to the game, the Aberdeen side drew first blood within 15 minutes as Tom Aplin landed a penalty after an earlier missed attempt.

The hosts crossed the whitewash first through Dom Wallen, who made an instant impact with a pick and go try after replacing the injured Ben Inglis.

Aplin added the extras to reward a dominant Grammar forward pack with a 10-point cushion after 25 minutes.

Hawks replied soon after as Archer took advantage while the hosts’ Robin Cessford was in the sin-bin.

This score was followed by a Max Priestly try as they took the lead for the first time to lead 14-10 at half time.

A Liam Brims penalty then increased the deficit to seven points around the 50-minute mark, but as it became colder at Rubislaw, the home supporters were given something to cheer about again.

Prop Tom Ryan finished off a powerful rolling maul before Aplin converted to draw the sides level. Both teams then shared a penalty apiece before Ryan Sweeney crashed over to put the Hawks seven points up again.

The game was not beyond Grammar and they urgently looked for a try, choosing to kick to the corner instead of aiming for the posts.

Unfortunately, this urgency gave way to a knock-on and the attacking opportunity was gone after the type of unforced error which had plagued the team’s second half.

The Hawks then delivered the striking blow as Priestly exploited an overlap on the left wing to score his second of the afternoon.

However, Grammar hooker Ryan Cook ensured they finished with a flourish with a fine try and despite the result, there were some standout performances from several of O’Connor’s players.

The final whistle was blown on proceedings after Aplin added the extras to take his personal tally to 10 for the day. [Ed: Sean Mills kicked the last conversion]. The loss has not put too much of a dent in Grammar’s hopes of reaching the play-offs at the end of season, but it is not the result they would have wanted.

Selkirk will prove challenging opposition for them next week.