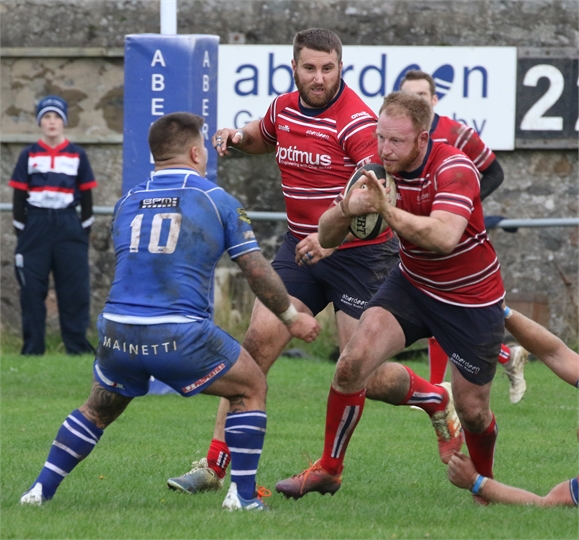 Aberdeen Grammar’s solid start to life in the Premiership continued at Rubislaw where they won their third start I four games, including two wins at home, sending out a strong message that no team coming to Aberdeen can expect easy pickings.

Head coach Ali O’Connor was delighted for several reasons, not least for having new players come in and make their mark, while pleasingly his side were able to stick to their game plan.

He said: “We had agreed that playing with a strong wind we should kick behind the Jed defence into the corners. It worked to perfection, enabling us to score two good tries, and then we followed it up with a disciplined, controlled second half. Performance.

“Composure is not always our strength but we were spot on, especially up front where prop Matt Schosser was immense in attack and defence.

“We were also able to give game time to two of our number nines, Jamie Troup and Patrick Ritchie. They both acquitted themselves well.”

It was Grammar who eased ahead in 20 minutes when centre Tom Aplin took on the Borderers, bulldozing over near the posts, giving himself the easiest of conversions.

Jed responded with one of their own when, after fine work from his forwards, winger Calum Young raced over in the corner for a try centre Robbie Yourston was unable to convert.

Grammar rallied and prompted by Stand-off Sam Knudson’s trickery were able to release winger Nathan Brown for his sixth try on league business in the corner, giving Aplin a difficult kick at goal which he stroked over with the nonchalance of a kicker in form, giving the home side a half-time lead of 14-5.

Jed reduced the deficit to six points two minutes into the second half when Yourston kicked a simple penalty, only for Aplin to kick a similar effort seven minutes later, but when Calum Young raced through a static home back line for his second touchdown of the afternoon in 56 minutes, the alarm bells were ringing for the home support at only 17-13 to the good for Grammar.

They need not have worried as club captain and winger Doug Russell took things into his own hands, running all of 50 yards through a retreating Jed defence to touch down in the corner and, although Aplin was unable to convert, he made the game safe with a straight-forward penalty two minutes from time.