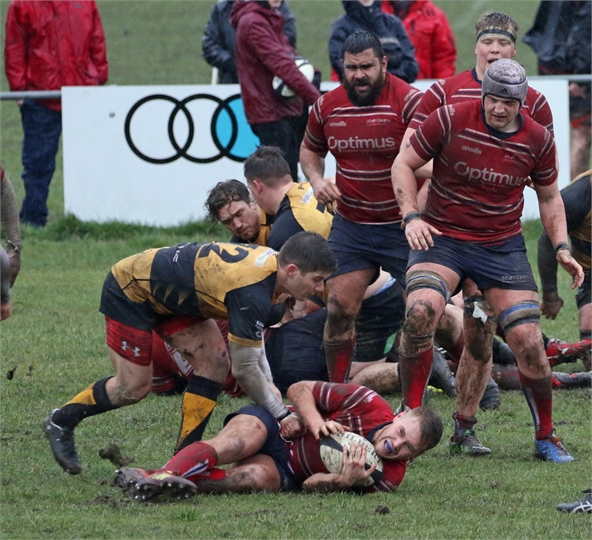 Aberdeen Grammar’s chances of reaching the Premiership play-offs next month were dealt a major blow as they suffered a 26-17 home defeat against Currie Chieftains.

The visitors took advantage of the Rubislaw side’s defence frailties to take the game away in a devastating six-minute spell just after half-time, during which the Edinburgh side scored two tries.

The home side battled back from being 26-10 down to come within a whisker of grabbing a valuable losing bonus point, only to fail to take the try-scoring opportunities which came their way.

It was a situation not lost on head coach Ali O’Connor, who said: “The difference between the two sides was Currie took their chances, while we squandered a number of good ones. We deserved at least a bonus point but once again came up short.

“Overall there were some outstanding performances, including those guys who came on as replacements. Craig Shepherd and Ross Anderson were very good in very difficult conditions.

“We are not out of it yet, but with Selkirk picking up two points for their draw at Musselburgh, it means we are now out of the top four and must beat Hawick away and Marr at home.”

After some early probing, Grammar took an early lead with a penalty in five minutes from centre Tom Aplin, giving the home side the confidence and momentum to build up pressure on the Currie try line. It paid off in 15 minutes when prop Matthias Schosser bulldozed over and, with Aplin adding the extras, a shock result looked a possibility.

But the Malleny Park side are not in second place for nothing, although it took a defensive mix-up for them to close the gap when centre Ryan Southern was given a free run at the Grammar line for a touchdown converted by stand-off Adam Hall, who then went on to add a try of his own on the half-hour mark. His conversion made it 14-10 at the break.

The start of the second half was nothing less than disastrous for the hosts as, in the space of six minutes, they all but surrendered the game, shipping two soft tries, attributed to scrum-half Gregor Christie and replacement prop Reece Patterson, one of which was converted by Hall, giving Grammar a mountain to climb at 26-10 down.

The try bonus point gained, Currie visibly relaxed, giving the Rubislaw side the opportunity to come back into the game. This they did in some style in 61 minutes when Aplin ran all of 70 yards to score a magnificent try and then had the breath to add the conversion, taking the score to 26-17, where it remained until the final whistle.

The atrocious conditions took nothing away from a hard-fought game, especially up front, as acknowledged by Grammar’s forwards coach Iain Stanger, who said: “It was a good old-fashioned game of rugby with the two packs giving their all.

“It was a close-run thing but Currie deservedly shaded it. They took the chances which came their way.”

Selkirk are now favourites to claim the fourth play-off place, given they are a point clear and have an easier run-in than Grammar against bottom-side Edinburgh Accies and GHA.