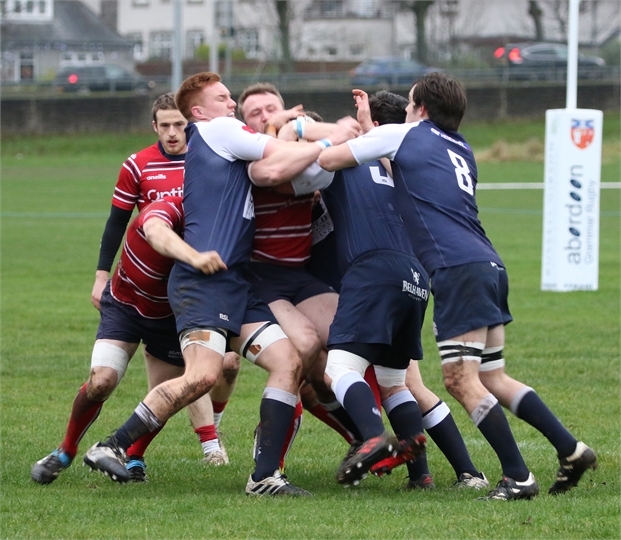 An error-strewn Aberdeen Grammar performance saw the Rubislaw side narrowly lose to Selkirk in a game for the purists.

Despite leading for most of the game, a series of unforced errors resulted in defeat against a team also battling for a play-off spot.

Grammar coach Ali O’Connor found it difficult to find many positives from a frustrating 80 minutes played in filthy conditions.

He said: “The conditions made playing open rugby difficult and it was always going to be a tight game, but full credit to Selkirk and their impressive defence towards the end of the match.

“We just need to be a little more clinical and try to close games out when the opportunity presents itself.

“Our scrummaging was good but unfortunately wasn’t rewarded in the way we would have liked it to be.

“However, our unforced error count killed us today and we let Selkirk back into the game far too easily.”

The Aberdeen side had made the best possible start to the game, putting Selkirk under a huge amount of pressure as several scrums were reset near the visitors’ try line.

Eventually Grammar’s number eight, Greig Ryan, crashed over the whitewash after holding the ball at the back of a resulting maul.

Tom Aplin duly added the extras with a tough conversion to give the Rubislaw team the best possible start to the game.

Leading 7-0, Grammar didn’t have to wait too long to further their lead, again scoring off the back of a strong scrummage. Tommy Morrison made a darting run, before flanker Nat Coe powered over after several phases. Aplin again added the extras as the Rubislaw side found themselves 14-0 to the good after 20 minutes.

Momentum started to swing in Selkirk’s favour, though, as the visitors were able to find gaps in Grammar’s defence.

On 30 minutes Josh Mackay exploited one of these gaps to steal one back for the Borderers before Callum Anderson found success with his conversion.

The hosts were then unfortunate to lose Sean Mills to injury before half-time after he was involved in a nasty collision which saw him being replaced by Andrew Ovenstone at full-back.

Selkirk started brightly in the second half and were awarded a kickable penalty soon after proceedings were under way again.

Anderson added the three points before slotting over another long-range effort on 52 minutes to reduce his team’s deficit to one point.

Grammar’s error count was piling pressure on the hosts, however, and Selkirk took the lead for the first time on the hour mark through another Anderson penalty.

However, the Aberdeen outfit gradually started to retain more possession, finding themselves entrenched deep in Selkirk territory for large parts of the last 10 minutes but they could not make it count.

The Borderers wouldn’t be deterred by the hosts’ valiant efforts and were able to clear their lines before winning a penalty to hand Grammar their third successive home defeat.