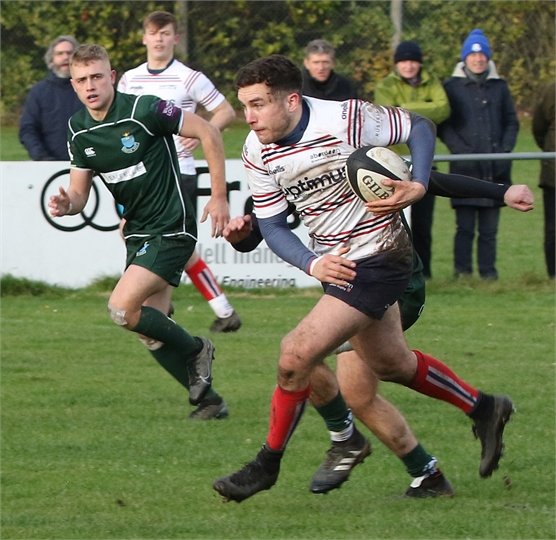 Aberdeen Grammar crashed to a second consecutive defeat at home to a Hawick team who produced one of their best performances of the season.

The 31-14 success was Hawick’s first win in the Premiership since beating GHA on September 14, much to the delight of their head coach George Graham.

“This is a massive win for us. Rubislaw is a tough place to come and win, as I have come to know in the many years I have been coming up here, although I was surprised at how little Grammar had to offer,” said Graham, a former Scotland and Gala player.

The words of Graham may have stung, but reflected the reality of the occasion.  The home side turned in a disjointed performance that never matched the verve and the organisation of the Borderers who effectively had the game won after 30 minutes by which time they were 24 points to the good.

Grammar forwards coach Iain Stanger acknowledged his side had been outplayed, even if they had staged a mini comeback early in the second half. He said: “This was not a good day for us. Our defending was woeful in the first half.

“Hawick were more focused and well deserved to win, but without making excuses we had key players missing, particularly in the pack where we have lost players of the calibre of Chris Jollands who has gone to New Zealand while Greig Ryan has just got married; at least he will be back soon.

“Jonny Spence had a stormer in our back row, as did Nat Coe in the unfamiliar role of No 8 but over the piece, we were well beaten, never recovering from our poor start.”

The Green Machine, as the Hawick pack are known, were early into their stride, setting up their highly organised back division for runs at the hesitant home defence, leading to a try as early three minutes when flanker Jae Linton broke two tackles to plunder the home line, and with stand-off Ali Weir adding the extras, the Mansfield Park men were well and truly on their way to victory.

Weir then added a penalty, followed by two touchdowns in the space of eight minutes, attributed to full-back Kirk Ford and centre Wiaan Griebenbow. Both were converted by the excellent Weir who was, by this time, running the show in the company of scrum-half Gareth Welsh.

The half-time whistle could not come quickly enough for the Aberdeen side which gave Stanger, the opportunity to gee up his misfiring charges, as admitted by prop Matthias Schosser who said: “We got a real rollicking.”

The treatment seemed to have worked as Grammar applied themselves to winning more ball at set pieces, getting their reward with tries from centre Tom Aplin and Coe, both converted by Aplin. But just when the home side looked set to overcome the fading Greens, the Border side rallied, rising to the challenge and scoring a late try, touched down by Linton and converted by Weir.

That ended the game as a contest, posing head coach Ali O’Connor a few problems to be resolved for the next outing at Marr – the Premiership’s unbeaten league leaders.