Aberdeen ended their 3 game losing streak and gained their first win of 2018 in an action-packed game against Selkirk, at Rubislaw.

Selkirk had previously won the last five encounters, yet Aberdeen's fast attack and clinical defence proved too much for the men from the south.

A minute's silence was held before the game with all Aberdeen players were wearing a black armband to show support for 2XV player Scott McNeil who lost his father Hamish on the 26th of January.

Aberdeen came out all guns blazing, scoring within 2 minutes of the first half. Centre Nathan Clough found a break in the Selkirk line to send winger Grant Walker over in the corner.

On the 8th minute, Captain Alex Ratcliffe set the stage for the home side's second when he turned the ball over and weighted a kick beautifully forcing the Selkirk to carry the ball over their own line. Greig Ryan took the glory and doubled Aberdeen's tally dotting the ball down off the back of the resulting scrum.

Matt Arnold was next to score running the ball from his own 22. He had the strength and quick thinking to quickly get back to his feet from a tackle and dove over the line to give the men in red a 19-point unanswered lead.

The bonus point was secured on the 33rd minute when winger Grant Walker went over for his second try of the match. A well worked two-man overlap created by Captain Ratcliffe and no. 8 Greig Ryan saw perfectly timed passes allowed Walker to jog over untouched.

The men from the Granite City played out of their skin in the first half with all players working as a unit and stepping up to the plate in both attack and defence pilling the on pressure throughout.

After the interval, the men from the south came out with more zip in their attack. Aberdeen continued to dominate the scrums and lineouts, but Selkirk were not out for the count.

In the 54th minute, winger Wagman shot through a massive hole in the Aberdeen defence to go over for Selkirk's first points of the game.

The final quarter saw the men from Rubislaw continue to pile on the pressure but could not find the gaps and opportunities they had in the first half. Selkirk continued to rise to the challenge and missed out on chances of their own as both sides began to tire.

Selkirk were not going down without a fight and on fulltime, a chip through bobbled just out of reach from the covering dive of Aberdeen's Doug Russell allowing no. 14 Wagman to score his second of the game. A lovely drop-goal conversion from no. 10 McColm brought with it the end of an exciting game of rugby.

After the whistle head coach Ali O'Connor said: "The players showed today that they knew what they were doing. The mindset was spot on this week compared to last and the opening try was a huge positive. The first 40 minutes we followed the game plan and got the rewards.

Selkirk woke up in the second half and produced a physical performance to be proud of. We lacked a bit of composure and our kicking game needs to continue to improve for next weeks game. I thought Taz (Matthias Schosser) at hooker was sensational and deserved his man of the match award.

For us 5 points and a win against Selkirk, we'll take as they don't come around very often."

Looking towards Gala next week: "We don't fear anyone in the league. We'll travel there with ambitions of winning. It'll be a huge challenge and we'll need to produce a full 80-minute performance as Netherdale is a tough place to go and win."

Aberdeen travel away to Gala on the 10th of February with kick off at 1500. 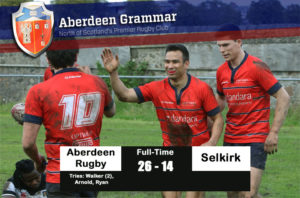